On Saturday, we went to Kigali to visit the Genocide Memorial Centre. 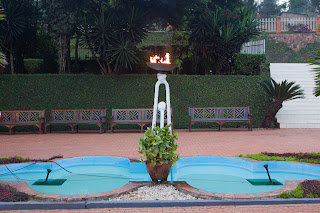 The general exhibits, at least in their English translations, presented a fragmented and rambling account of the long history of Rwanda's genocide. (While the final and most horrible chapter took place in the early 90s, the story began several decades before that.) An entire room, while dramtically lit and well designed visually with floor-to-ceiling photo collages, typically has only 3 or 4 paragraphs of text to provide context. 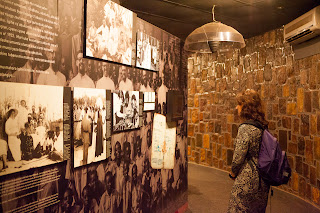 Far more effective are the videos which give first-person accounts of the genocide. Unfortunately, these only include about 15 minutes of video altogether. I would much rather have watched a couple of hours of these survivor and perpetrator testimonies than the educational exhibits as they currently are.

Outside of the museum are many mass graves. These contain the remains of more than 260,000 people killed in Kigali alone. I found the experience of touring the grounds strangely unmoving. There is nothing there to connect with. If not for the small signs asking visitors to stay off of them, the graves could easily be mistaken a cafe patio, and the landscaping looks like every yard and traffic circle in the city. I found nothing that allowed me to connect what I was seeing with what it represented. 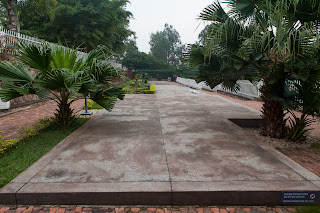 260,000 people is not a number that can be easily visualized. There needs to be something visual here to communicate the scale and nature of what visitors are looking at. It doesn't need to be something as demanding as the Vietnam Memorial or Arlington National Cemetary. It could be as simple as a figure of a man, woman, or child etched into the concrete lids of the mass graves for every person whose remains lie within.

The two most moving exhibits in the museum are near the end of the indoor circuit. The first is a series of sculptures. I have done my best to capture them here, but you really can only appreciate them in person. They are almost disturbingly evocative and very moving. 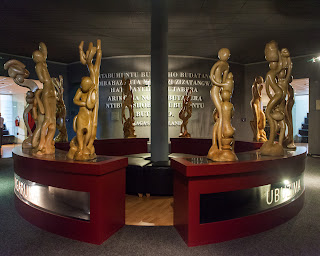 The most moving exhibit is a small round room with several cases of bones, No text needs to accompany this exhibit, and thankfully none is provided. The room is bare and almost unlit other than the minimal lighting in the cases themselves. Some cases piled full of leg bones give a weak sense of the scale of the atrocity, but is difficult to identify these with individuals. We don't think of people around us as assemblages of tibia and fibia. 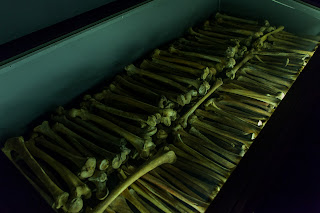 Two other cases contain skulls, and these provide the narrative so much of the museum lacks. Each skull once housed a conscious human being, with dreams and desires, friends and family, delights and disappointments. It is easy to imagine the living faces that once moved across these rigid, fragile bones, animated with expressions of love, hate, joy, and sadness. 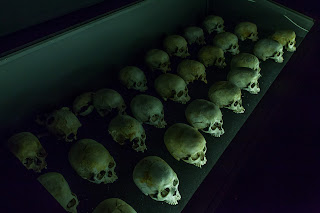 Each bears clear evidence of the violent end of a human life: large fractures, gouges where machete blades lodged in bone, shattered faces, domes crushed by blunt weapons, and bullet holes. Each injury records the moment when one human being followed through on a conscious decision to murder another, forever ending an irreplaceable life and all its potential. You could walk past this dark room without noticing it, but it is the true memorial inside of this museum. 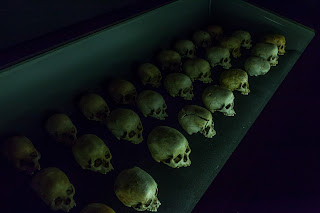 The other installations merely provide context about what led to these fateful decisions: petty government policy and hateful propaganda that turned one group against another, and a developed world more concerned with maintaining its comfortable status quo than averting or stopping a genocide. This is interesting and intellectually satisfying, but I can't help feeling that all of this circumstantial complexity, while it tries to answer the gnawing questions of why and how such a thing could happen, distracts from the important message the skulls and video testimonies deliver.

That message is this: hundreds of thousands of people humiliated, tortured, and brutally murdered their countrymen in cold blood. 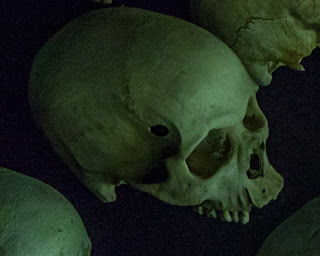 They murdered their neighbors. 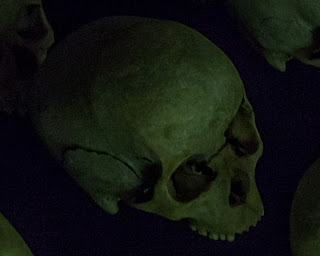 They murdered their friends. 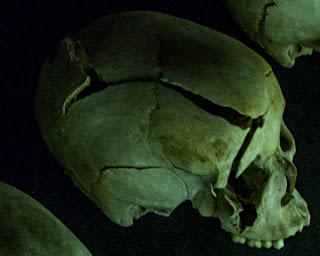 They were civilians, not trained, hardened soldiers. They were farmers, teachers, priests and professionals and politicians, fathers and sons. They were just like us. We are all capable of doing the same thing. We must always be on guard when others appeal to our fear, to our jealousy, to our contempt. We must always control our base urges. We must never let this happen again.
Posted by Unknown at 5:30 PM


The postings on this site are the personal opinions and reflections of Liquidnet employees and family members. They do not necessarily represent the positions, strategies, or opinions of Liquidnet Holdings, Inc. or the Agahozo-Shalom Youth Village.

Learn more about the project

Learn more about the Agahozo-Shalom Youth Village, a unique residential community and high school for vulnerable youth in Rwanda:
http://www.asyv.org/

Race4Rwanda is the way that individuals from around the world are raising awareness and money for the ASYV.
Learn more and start your own race:
http://race4rwanda.asyv.org/

Check out our previous blog